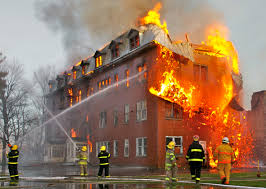 Firefighting is the act of extinguishing fires. A firefighter suppresses and extinguishes fires to prevent loss of life, and/or destruction of property and the environment. Firefighters may provide many other valuable services to the community they serve, such as emergency medical services. Firefighting is a highly technical skill that requires professionals who have spent years training in both general firefighting techniques and specialized areas of expertise. Some of the specialized area of fire and rescue operations include Aircraft/airport rescue; Wildland fire suppression; and Search and rescue.

One of the major hazards associated with firefighting operations is the toxic environment created by combusting materials. The four major hazards associated with these situations are smoke, the oxygen deficient atmosphere, elevated temperatures, and toxic atmospheres. Additional risks of fire include falls and structural collapse. To combat some of these risks, firefighters carry self-contained breathing apparatus.

The first step of a firefighting operation is a reconnaissance to search for the origin of the fire and identification of the specific risks and any possible casualties. A fire can be extinguished by water, fuel removal, or chemical flame inhibition. In the US, fires are sometimes categorised as “one alarm”, “all hands”, “two alarm”, “three alarm” (or higher) fires. There is no standard definition for what this means quantifiably, though it always refers to the level response by the local authorities. In some cities, the numeric rating refers to the number of fire stations that have been summoned to the fire. In others, the number counts the number of “dispatches” for additional personnel and equipment 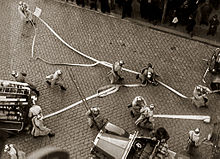 There was no public fire-fighting in the Roman Republic. Instead, private individuals would rely upon their slaves or supporters to take action. This action could involve razing nearby buildings to prevent the spread of fire as well as bucket brigades. The very wealthy Marcus Licinius Crassus was infamous for literal fire sales. He would buy burning buildings, and those adjacent to them at low prices, and rebuild them using his team of 500 slaves. However there is no mention of the men extinguishing the fires. There was not an organized fire-fighting force in ancient Rome until Augustus’s era.[3]
United Kingdom

Prior to the Great Fire of London in 1666, some parishes in the UK had begun to organise rudimentary firefighting. After much of London was destroyed, the first fire insurance was introduced by a man named Nicholas Barbon. To reduce the cost, Barbon formed his own Fire Brigade, and eventually there were many other such companies. By the start of the 1800s, those with insurance were given a badge or mark to attach to their properties, indicating that they were eligible to utilize the services of the fire brigade. Other buildings with no coverage or insurance with a different company were left to burn [4] unless they were adjacent to an insured building in which case it was often in the insurance company’s interest to prevent the fire spreading.

In 1833, companies in London merged to form The London Fire Company Establishment.

Steam powered apparatuses were first introduced in the 1850s, allowing a greater quantity of water to be directed onto a fire.

The steam powered appliances were replaced in the early 1900s with the invention of the internal combustion engine.

In World War Two (1939 – 1945) a National Fire Service was established to supplement local fire services. At that time there was no country wide standard for Fire Fighting terms, procedures, ranks or equipment (such as hose couplings) and on occasion fire services from different part of of the UK who had moved to fight conflagrations started by Nazi Bombing had difficulty working with local resources. There was also international aid when after heavy bombing on Belfast in Northern Ireland, firefighter and equipment came from Eire to assist(Eire-The Republic of Ireland was neutral in WW2.)

As early as January of 1608, Jamestown, Virginia, saw a fire destroy many of the colonists’ provisions and lodgings. The early colonial cities of Boston, New York and Philadelphia faced fires, and volunteer companies soon formed.[5] In 1736, Benjamin Franklin founded the Union Fire Company in Philadelphia, which became standard for volunteer fire company organization. Two tools were very important to firemen; salvage bags and a bed key. A bed key was used to break down the wooden frame of a bed to get it out safely and salvage bags were used to get any valuables out and to safety.[5]

The first attempt at fire insurance went bust after a large fire in Charlestown, Massachusetts, in 1736. Franklin then organized the “Philadelphia Contributorship” to insure houses from loss by fire in 1740. This ended up being a success. They adopted “fire marks” to show as easy identification for fire insurance. Firefighting started to become formalized with rules to provide buckets, ladders, hooks, and the formation of volunteer companies. The chain of command fell into place

Register For This Site